BMCS Hall of Fame and Medal

The Hall of Fame and Medal is to recognize prominent chemists for outstanding, sustained, contributions to any area of interest to the RSC Biological and Medicinal Chemistry Sector (BMCS), e.g. medicinal chemistry, agriscience, biooorganic chemistry and chemical biology. This is an Individual award to recognize  prominence  and  significant, sustained, scientific impact  in the field of medicinal chemistry, agriscience or chemical biology, including teaching excellence, outstanding contributions to the BMCS, or any combination thereof.

The BMCS is pleased to announce the 2021 call for nominations for its Hall of Fame and associated medal which recognises chemists for outstanding, sustained, significant contributions to any area of interest to the BMCS, including medicinal chemistry, agriscience, bio-organic chemistry, and chemical biology. Independent nominations may be submitted by e-mail outlining the justification and including the nominee’s CV and publication list. Additional independent letters of support to reinforce the nomination are strongly encouraged. Nominees should be resident in the UK or continental Europe, or have spent a considerable proportion of their career there. There is no requirement to be an RSC or BMCS member. There are no age restrictions, and nominees may have an academic or industrial background. Nominations should be submitted by the end of September 2021 and the outcome will be communicated to nominators and nominees by mid-December 2021. Inductees will receive a medal and certificate, and will be invited to give a plenary lecture at an appropriate BMCS organized conference.

Independent nominations should be sent to Conference Secretariat from 1st March to 30th September 2021.

BMCS Hall of Fame and Medal 2020 – Announcement of Winner

The BMCS is delighted to announce that David Rees PhD, FRSC, FMedSci, Chief Scientific Officer at Astex Pharmaceuticals, will be the 2020 inductee to its Hall of Fame, and the recipient of the associated medal.

David is recognised internationally for his innovative use of chemistry in drug discovery. His research has forged bridges between academia and industry and he has held prominent positions in learned societies such as the Royal Society of Chemistry. He has led collaborations resulting in the discovery of three launched drugs, the anaesthetic agent Sugammadex which has been used in over 30 million patients in 60 countries, and the anti-cancer agents Ribociclib and Erdafitinib, both predicted to achieve blockbuster status. Much of Astex’s industry-leading productivity has been dependant on David’s chemical expertise. David is well known for his calm authority, scientific rigor and enthusiasm, and has over 140 publications and patents.

The purpose of this award is to recognize prominent chemists for outstanding, sustained, and significant scientific impact, or contributions to any area of interest to the BMCS, eg medicinal chemistry, agriscience, bioorganic chemistry, chemical biology.

The formal medal presentation will be made at the 21st RSC / SCI Medicinal Chemistry symposium on 12th September 2021.

The RSC-BMCS is delighted to announce that Sir Simon Campbell CBE FRS FMedSci will be the 2019 inductee to its Hall of Fame, and the recipient of the associated medal.

Sir Simon has made notable and long standing contributions to the pharmaceutical industry and to the wider chemistry community in the UK with many significant scientific achievements. At Pfizer, he was a key member of the research teams that discovered Cardura, Norvasc (Istin) and Viagra which all became “best in class” with respect to therapeutic profile and commercial success. He has co-authored over 120 publications and patents and has received various national and international awards including the RSC BMCS Lifetime Achievement Award in 2016. Sir Simon served as President of the RSC 2004-06, and was appointed CBE for Services to Science in 2006 followed by a Knighthood for Services to Chemistry in 2015. His current scientific activities are largely focused on drug discovery for neglected diseases including malaria and TB.

The purpose of this award is to recognize prominent chemists for outstanding, sustained, and significant scientific impact, or contributions to any area of interest to the BMCS, eg medicinal chemistry, agriscience, bioorganic chemistry, chemical biology. The formal medal presentation will be made on an occasion yet to be announced.

The inaugural inductee to the BMCS Hall of Fame was Professor C Robin Ganellin FRS, Emeritus Professor of Medicinal Chemistry at University College London. Professor Ganellin has inspired chemists and those in the pharmaceutical industry for decades. He devised the syllabus and taught for many years at the now well established RSC Medicinal Chemistry Summer School. He is a drug hunter, and has had exceptional industrial and academic careers. His pioneering work, including the discoveries of the first histamine H2 and H3 receptor antagonists as medicines, has changed the lives of millions of patients. 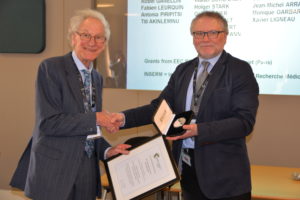